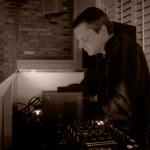 Born in the year that Autobahn by Kraftwerk was released, went to school round the corner from Chenies manor, Henry VIII’s country residence which was rumoured to be haunted by Anne Boleyn’s ghost. Home was a stone’s throw from the newly-consructed M25, which itself was home to acid house. This fact itself provided impetus for doing tracks on cheap synthesizers and drum machines after school.

Went on to study at Sheffield – a city on the move with a steel techno scene. Stayed on in Sheffield ostensibly to do a PhD in quantum mechanics but realistically because it was essential to carry on going to electronic music nights in Sheffield for inspiration. It seemed that the most interesting music was that which wasn’t fixed to a grid and contained inherent uncertainties and in which something different could be heard on each listen – as if perception itself was physically affecting the recorded music after the fact. This interest in sound shaping led to gigs in London at the Sprawl and Moon Palace at the turn of the millennium. A highly limited 7? called “Time Is A Chasm” followed and was released under the name ‘Hysteresis’. This was played by John Peel at the correct speed in November 2002.

Settling in Bristol, which is a city under a variety of grooves, Tudor Acid was gradually brought to life. Initially taking a step back to develop music which worked on the dancefloor, gigs at the legendary acid night ‘I Love Acid’ alongside Luke Vibert, The Doubtful Guest and mu-ziq followed. These nascent Tudor Acid sets involved live 303 and 909 and drew the attention of Keith Tenniswood and drew an ecstatic crowd reaction. Tudor Acid then went on to perform a career-defining gig at Lo Motion in January 2008. Gigs at ‘All Your Base Are Belong To Us’ and “The Others” art gallery followed swiftly. In recent gigs at Disco_r_dance and The Centrifuge supporting Wisp, the Tudor Acid sound has been widened to incorporate the sound-shaping and tricks with time that were picked up in Sheffield and these have only served to heighten the audience appreciation and make the music more dancefloor friendly. The release of the Merri Portland album in February 2010 sent many ripples through the electronic music world and resident advisor described the track ‘Cellular’ as on a par with the best of Aphex while DJ Magazine noted the futuristic electro, Rephlex-style breaks and Detroit-influenced sounds.

The release of Tudor Acid 304 – remixes featuring reworkings of Tudor Acid tracks by Luke Vibert and Radioactive Man – is set to be a summer club smash which has already been playlisted by Laurent Garnier and Billy Nasty. 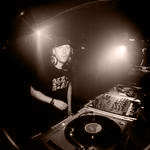 Keith started playing guitar aged nine. All through his teen years he was in various local bands until he discovered the joys of acid house and rave in the early 90's. Weekends were spent going to free parties up and down the country, filling up a van with mates and after much pissing off the police and authorities culminating in the rave that was Castlemorton.

After this scene died down a bit he started to frequent the now legendary clubs like the Drum Club, Sabresonic, and Full Circle where he met and became friends with Jagz Kooner and Andrew Weatherall of Sabres of Paradise... Released a record under the name of 7hz, which came out on Phil Perry's Full Circle label. Using the minimal knowledge of studios and a keen ear, he did the front of house sound for the Sabres on their support tour with Primal Scream in 95. This was to be a life changing experience. Then became in house engineer at Sabresonic studios where he learned to program and mix. After meeting and working with all sorts of people that used the studios, went to Belfast to work with David Holmes and co produced his album 'Lets Get Killed'... Forged a now ten years partnership with Weatherall as Two Lone Swordsmen, when the other members of Sabres where busy with their other band, The Aloof.

Fast foward ten years and Keith and Andrew have released four albums, two for Andrew's own label, Emmisions and two for Warp records. Also countless EP's and 12's and remixed many different artists including Primal Scream, Spiritualized, Howie B, David Holmes, Stereo Mc's, Lali Puna, St Etienne, Alter Ego, Calexico, Broadcast, Six by Seven, Dot Allison, Slam, and erm, Texas... to name a few. When Andrew was busy DJing every weekend, Keith would get in studio on his own and record his own stuff which was to become his Radioactive Man project... Has since recorded 2 albums, 'Radioactive Man' and 'Booby Trap' on Rotters Golf Club, and various EP's including 'The Uranium EP ' and 'Dive and Lie Wrecked'... Also remixed the likes of Freq Nasty, Red Snapper, Meat Katie and Tipper.

The third album entitled 'Growl' will be out in spring 2007 also on Rotters Golf Club. Also a 12" will be out on his own label - Control Tower entitled 'Ye Olde Skoole Rayve EP' in Sept 06. Control Tower was started in 99 with fellow cohort Simon Brown, a.k.a The Dexorcist. They've released their own material and stuff by Bass Junkie, Kansascityprophets, Dead Silence Syndicate, Dirty Hospital, Silvah Bullet, and have a new signing from Lithuania called Moondisco, and also old friend Subliminal Criminal.

Things have come somewhat full circle when the Swordsmen got a drum kit and blew the dust of a few guitars with their Double Gone Chapel album for Warp in 2004. Similar musical adventures continue with their newly finished album entitled 'Wrong Meeting', after a tour last year taking in most of the major European festivals.. Keith's DJing has taken him all over the planet inc Tokyo, New York, San Francisco, Istanbul, Budapest, Barcelona, Rome, Paris and er Preston. His DJ style is underground dancing music taking in Electro, Breaks, Techno and Drum n Bass.. 2008 and its high time for a new Radioactive album.. entitled 'Growl' it will be out on 12th May 2008 but is available now through all major sites.. The album is a culmination of the last 5 years of studio stuff.. schizophrenic as ever, theres all sorts of vibes on there.. lots of live dates this summer.. Also playing guitar in Christopher D Ashley's band doing festivals and club dates..